Our Past Grand Masters 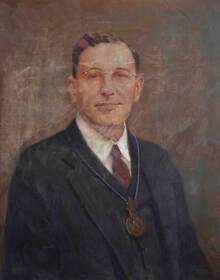 Alfred Wells Lassiter was born July 28, 1880 near Murray, Kentucky, the son of Richard Rix and Harriet Anne Lassiter.  He married Mabel Matilda Lewis at Humboldt, Tennessee on December 23, 1908 and they had two daughters.  He was active in the Methodist ministry from 1911 until his retirement in 1951, having held pastorates at many points throughout the Memphis Conference during his 40 years in the ministry.

He was greeted in Fayette Council 188 at Somerville on October 27, 1920, and transferred his membership to Parsons 89 and then to Humboldt 100.  He served as Thrice Illustrious Master 89 in 1934.  He received the Thrice Illustrious Masters degree in the charter class at Nashville on January 29, 1940.  He was knighted in Jackson Commandery 13 at Jackson on June 5, 1925.

In the Grand Lodge he served as Grand Chaplain in 1928 and 1930, and was elected Junior Grand Warden on January 29, 1931, and advanced each year until February 1, 1934, when he was elected Most Worshipful Grand Master. 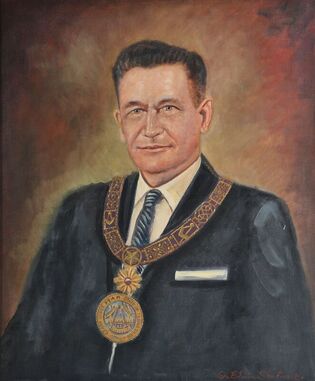 Wiley Odell May was born in West Memphis, Arkansas on December 28, 1905, the son of Jacob Oscar May and Katy Gentry May.  He was educated in the public schools of Memphis, Tennessee.  He was married to Miss Wilma Hardwick at Memphis on September 12, 1924, and they had five children; Wiley O. Jr., William H., Wilma, Jon R., and Michael D.

​May was President-Treasurer of Automatic Heating and Service Co. with headquarters in Memphis until his retirement in May of 1970.  He was a member of Bellevue Baptist Church.

He received the Scottish Rite degrees at Memphis in March 1930, was designated a Knight Commander of the Court of Honor in October 1943 and was coroneted a 33° Honorary on October 21, 1949.  He served as Wise Master of Calvary Chapter, Rose Croix, in 1948-49 and Venerable Master of the Memphis Lodge of Perfection and Personal Representative for the Valley of Memphis from 1969 until his death on November 7, 1991.  He received the Grand Cross on October 18, 1979, the highest individual honor bestowed by the Ancient and Accepted Scottish Rite for the Southern Jurisdiction.

May was initiated into Al Chymia Temple, A.A.O.N.M.S., at Memphis on April 21, 1943.  He was initiated into the Eastern Star in O. K. Houck Chapter 229 on November 25, 1933.  He was a member and Past Sovereign of St. Stephen Conclave, Red Cross of Constantine, and also served as Recorder.  He was a member of the Royal Order of Scotland and of the Royal Order of Jesters.  He was long active in the work of the Order of DeMolay and was the first Senior DeMolay to be elected Grand Master of Tennessee. 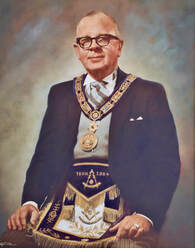 James Emmit McDaniel was born March 29, 1918 in Shelby County, Tennessee, the son of Emmit D. and Sally
Pearl (Ware) McDaniel.  He was educated in the public school system of Memphis.  He was married to Iris Marnette Joyner on April 20, 1941 in Memphis and they had one daughter, Joyce Ann.   An Army veteran, he was also a Captain in the Army Reserves.  He retired from Memphis Light, Gas and Water.

Brother McDaniel received the Scottish Rite degrees in Memphis, on April 22, 1948, was awarded the rank and decoration of Knight Commander of the Court of Honor on October 19, 1965 and was coroneted a 33° Inspector General Honorary on October 29, 1969.  He served as Master of Kadosh in 1970-71 and started serving as Director of the Work beginning in 1971.

He received the ceremonies of the A.A.O.N.M.S. in Al Chymia Temple, in Memphis, May 5, 1948.  He held the DeMolay Honorary Legion of Honor and the Rainbow Grand Cross of Color.

In the Grand Lodge, Brother McDaniel was elected Junior Grand Warden, March 26, 1981 and advanced each year, being elected Most Worshipful Grand Master, March 29, 1984. 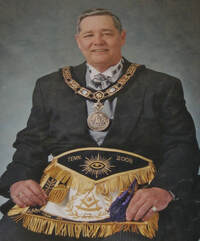 Jerry Lynn Hanson was born to Frazer Douglas and Laverne Yarborough Hanson in Charleston, South Carolina on March 28, 1947. He was educated in the Carter County Public School System - Elizabethton, TN., University of Tennessee, and the University of Memphis. He is a retired Federal Aviation Air Traffic Control Supervisor of 39 years.Brother Hanson married Mary Dianna Sheely on April 19, 1980 and have four children, Timothy Christopher, Bradley Douglas, Amanda Michele, and Shelley Lynn Hanson. They also have one Grand Dog "Sparky". Brother Hanson and Mary are members of New Hope Christian Church in Bartlett, Tennessee.